Published at:
11-02-2016
Neushoorn is the cultural lynchpin of Leeuwarden, accommodating the eponymous pop music venue plus café as well as the Friesland College’s creative education branch, D’Drive. In its presence and material use, the building expresses the dynamics of these functions. Notable details in het building include salvaged parts of demolished buildings and samples of graffiti cut from repurposed brick walls.
Urban context

The new Neushoorn complex is located at the corner of the old Ruiterskwartier and the Haniasteeg in the historic centre of Leeuwarden. The design builds on the original small-scale urban morphology with its winding streets and lanes. Architect Chris de Weijer (DP6 architecture studio): “It was quite a challenge, but we really wanted to preserve the old buildings and the atmosphere of the existing lanes while at the same time turning them into something new.” Sections of the existing premises at Ruiterskwartier 41 were retained and now form part of the main building. The main building was designed to be compact so room could be found at the rear of the premises to add a square to the historic Haniahof and create a public open space. De Weijer: “In this way the other side of Neushoorn also comes alive”. 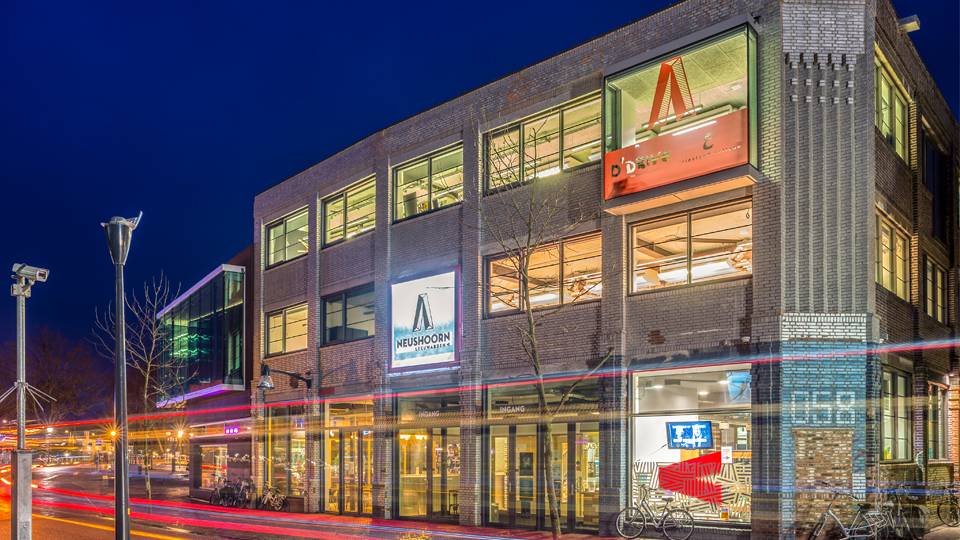 The design of Neushoorn provides for large-scale venues as well as more intimate areas, including two stages, a café, rehearsal rooms and cultural production facilities, as well as accommodation for workshops plus teaching rooms for D’Drive, the practical education branch of Friesland College.

Most of the main building at the corner of the Haniasteeg, Ruiterskwartier 41, was preserved, its ground floor accommodating the joint entrance lobby plus foyer and cloakroom. The stairs leading from the entrance lobby to the D’drive teaching facilities and the Neushoorn offices are covered by a glass roof that allows daylight to penetrate all the way into the building. Next to the existing building a new part was added, creating a ‘New Lane’ that separates and connects the two. This intermediate zone with the foyer and the study landscape establishes a clear functional link and at the same time makes for short routes to the theatres, studios, changing rooms, teaching facilities and offices. Project leader Kerstin Tresselt (DP6 architecture studio): “There is a real natural flow between the music venue and the school”. Some of the old buildings along the Schavernek have also been kept. Their facades, which have been given a slightly brighter colour scheme, hide the pop venue’s changing rooms and green room. 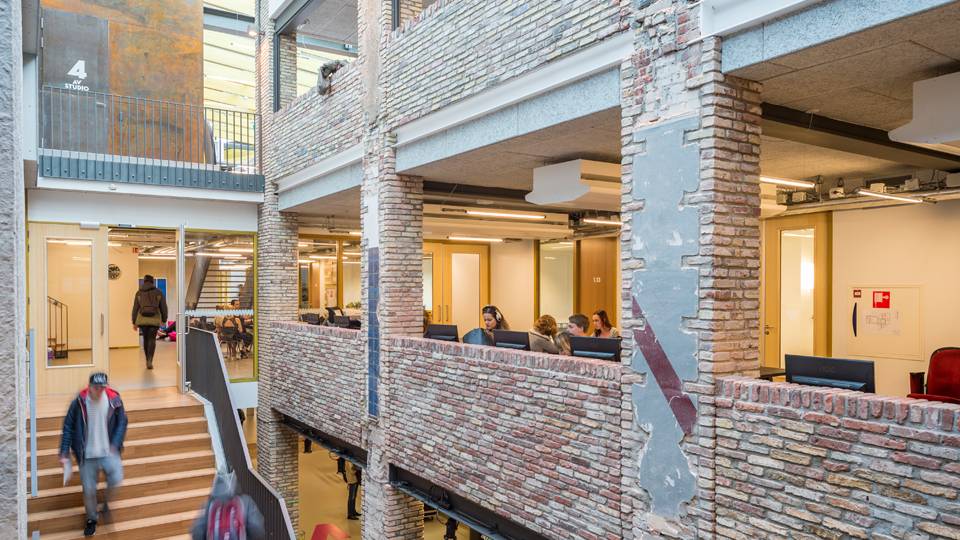 The concert venues themselves are located at the rear of the building so the facades could be kept transparent to allow passers-by to see straight into the building and observe the hustle and bustle inside. De Weijer: “The special thing about this venue is that it is also in use during the day. We wanted to make these dynamics visible, which is why the ground floor facade is backed by the pop café and the first floor features a dance and drama studio presented as a glass box”.
The use of materials includes existing and salvaged elements as well as a wealth of shapes and materials including glass, Corten steel and various types of wood. Some of the bricks from the demolished buildings were reused in the new facades. De Weijer: “As all the bits and pieces varied in size, there was no way we could end up with a smooth finish, so we opted for bare brickwork”.

The acoustics can make or break a music venue. A good sound is all that matters to users of a music stage, which is why the sound production functions of the building have been designed as free-standing ‘boxes’ that maximise sound insulation. Acoustics also played a major role in the choice of walls, with the angled wall forming a theme within the building, while the wall next to the main staircase doubles as an acoustic panel specially designed by DP6.

Artists, audience members and students alike love the new music venue. Neushoorn boss Jan Pier Brands: “The design has been kept a bit rough around the edges, and that works really well. Every night is party night, and the building oozes energy during the day as well”. 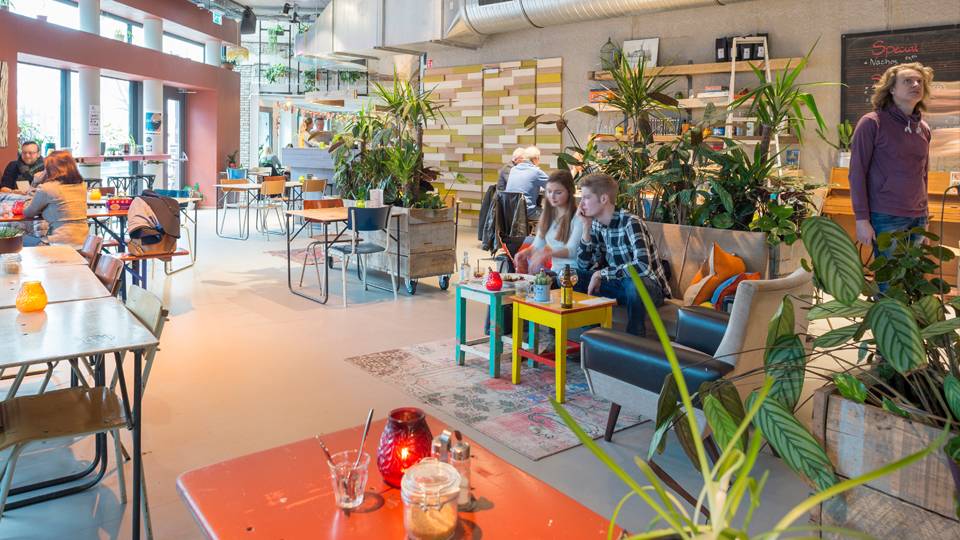